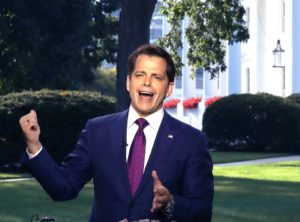 Remember when speaking to any media person they will print or record your words verbatim. This statement relates to chapter 18, “Have access to major papers and local / social media, in my book. I should not have to point out that an intelligent mind that is educated and well versed enough to be the top communications person for the President should have better ways than to express themselves through cursing.

Mr. Scaramucci made the statement to a reporter on a CNN talk show. He had called in so he knew his statements were going live and unedited. Then he later called a reporter from the New Yorker magazine and started talking and complaining about his co-workers. The reporter Ryan Lizza said, “Scaramucci, who initiated the call, did not ask for the conversation to be off the record or on background.” As I said in the book, it is not a reporter’s job to keep secrets but to report the news. Moreover, any tension between staff members in the white house is news.

Mr. Scaramucci initiated the call to the New Yorker reporter, but you must still let them know that what you are saying is not to be printed, or the statements can’t be attributed to you, or that they can’t print any of this but it is for their education of the subject. That is when you request for the dialogue to be “for back ground purposes only.” And then wait for the reporter to agree or tell you why it can’t be on background or off the record.

If you begin talking without a clear understanding of how your words will be dealt with from the reporter, you could have quotes attributed to yourself on line such as:

– “Reince is a fucking paranoid schizophrenic, a paranoiac.”
– “I’m not Steve Bannon, I’m not trying to suck my own cock. I’m not trying to build my own brand off the fucking strength of the president.”
– “Yeah, let me go, though, because I’ve gotta start tweeting some shit to make this guy crazy.”

Even if you would say these things, I’m sure you don’t want them attributed to you on the front page of a newspaper. As an employee of a company of a staff member of a politician, you represent them out in public. You manners, dress and behavior all reflect on the politician your serve. For Mr. Scaramucci, I think it is a good thing his boss is Donald Trump, who just might like someone that talks like that. Mr. Scaramucci later said he would, “refrain” from using colorful language going forward.” I am sure people who look upon that office with high regard will appreciate that.